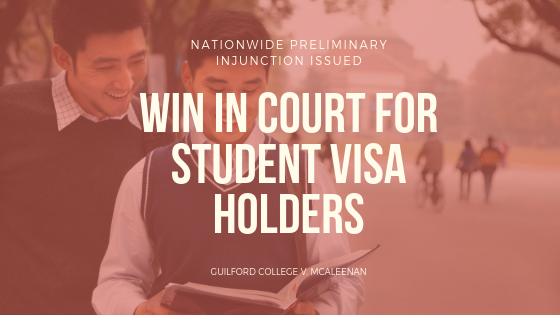 On Friday, May 3, the Middle District of North Carolina issued a nationwide preliminary injunction "effective immediately, enjoining USCIS's memo titled "Accrual of Unlawful Presence and F, J, and M Nonimmigrants," originally issued on May 10, 2018, and updated on August 9, 2018, that went into effect on August 9, 2018, until further order of the court. The memo penalized international students for overstaying or violating the terms of their visas, even accidentally." (Guilford College v. McAleenan, 5/3/19) (AILA Doc. No. 18102471).

This is good, temporary news for foreign national-students across the country. This memo has created a good deal of confusion and fear as far as what constitutes being "out of status" and when unlawful presence begins to accrue exactly. Where the policy in effect for the past 20 years made clear unlawful presence started to accrue upon an order from the immigration court that these visa holders were out of status, the new policy requires no such adjudication. Under the new policy, unlawful presence may have started accruing at an unknown or arbitrary date in the past, to be determined by a court, and that could lead to a very serious 3 or 10 year bar of re-entry.

What this means is that a student may have been out of status - or in the U.S. unlawfully - at a moment in time, by doing something innocently or with no intent to be in the U.S. unlawfully, and they wouldn't know it until a judge tells them so, which could be months or years down the road, leading to a bar from entering the country.

These arbitrary policies being put in place by this administration are dangerous and frustrating.  Immigration laws are complicated enough without the administration muddying the waters further. This policy change, along with others enacted since 2017, provide no clear procedural basis to give adequate notice to a person subject to these policies of when they might be violating the laws. Plus, the line to cross to be in violation of status changes with lightning speed and on a whim. These policies create chaos and harm the lives of foreign nationals with little legitimate basis to be found other than to make it as difficult as possible for anyone seeking to come to the U.S. to study, work, and overall benefit the U.S. economy.

The Court, in granting the nationwide preliminary injunction, stated "the record does not reflect any countervailing harm to the government in maintaining the status quo by returning, for the duration of this lawsuit, to a policy that it voluntarily followed for over twenty years." The injunction was granted on the grounds that the government, when enacting the policy, failed to follow procedures under the Administrative Procedures Act and that the policy appears to conflict with the Immigration and Nationality Act as intended by Congress.

At least for now, there is a bit of clarity for student visa holders. I expect this injunction will be appealed all the way up to the Supreme Court.